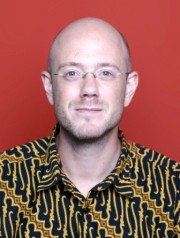 Having been trained in Indology (with a focus on Sanskrit) at the University of Leiden and at Harvard, Arlo Griffiths began his academic career with a doctoral fellowship from the Netherlands Organization for Scientific Research that allowed him to pursue research in Vedic philology. His research focused on the Paippalāda tradition of the Atharvaveda, still alive in Orissa (India) to this day. In the field, he learned the (Indo-Aryan) Oriya language, and started being interested in non-brahmanical traditions. In the margin of his doctoral research, he was able to do some work in the domain of descriptive linguistics of the tribal languages of the region, particularly those belonging to the so-called ‘Munda’ branch of the Austroasiatic family. While still remaining active as Indologist with a specialty in Vedic studies, the focus of his research gradually shifted to Southeast Asia, first and foremost the epigraphical documents in Sanskrit and in vernacular languages, both Austroasiatic and Austronesian (Cham, Khmer, Malay, Javanese). His research priority is the publication of so far unstudied manuscripts and epigraphical documents, in the form of critical editions, and their exploitation from the historical point of view.